Please Note:  For my daughter’s first birthday my wife “asked” me to write a letter we can give her when she turns sixteen.  Hopefully this is a letter I can hand to her directly and not my wife’s way of preparing to find a way to get my life insurance.

My life has rarely made sense, especially when it came to finding a career.  Your Nana used to joke how she was wearing out her knees from all the praying she was doing for me because for awhile there my life was constantly hit by one hurdle after another.  After my first couple degrees, I soon started to fear that I had peaked in high school and was now like the former high school football star who never went anywhere after.  My last year of high school I went to Europe, I started an OFFSA winning Ultimate Frisbee team, I ran a comedy group that had a couple great shows, and I graduated as valedictorian ontop of a number of other big awards.  Back then my life looked so promising.  I was sure I was going to be a millionaire performer by thirty with a wife and kids I could spoil.  Slowly that hope began to fade and I was thirty living at your Nana’s house rent free because she felt bad that I was making below poverty level income as a youth pastor.  I had gone from being a straight A student to the bottom percent for worldly success with little hope of improvement.  I was embarrassed at my inability to live a grown up life, but at the same time I somehow felt like I was where God wanted me to be.  It was really strange.  After my time working for the church was done, I had many moments of reflection where I felt like a total failure and questioned how God could let that all happen.  It wasn’t as if I was lazy or wasted time.  In fact, it was the total opposite.  I had been a workaholic people pleaser most of my life.  I never really played video games and at fifteen I gave up watching and playing hockey in order to focus on school and work.  I spent many weekends doing school work and volunteering instead of being with friends and playing the sports I loved in order to be “responsible.”  How could someone who wanted to be good and dedicated to doing good keep falling flat?

When I was thirty four my eight years as a youth pastor came to an end because the church couldn’t afford me anymore despite having just installed a hundred thousand dollar lighting system, which was worth more than three times my annual salary.  This was the second time my program was cancelled despite it being the most successful part of the church.  How could God allow that?  I tried to follow God’s leading yet I kept finding myself rejected and unemployed.  Fun fact, the next church your mom and I joined shut down after us being there a year.  Was I cursed?  Add to this the problem that I wasn’t “grown up” enough to be hired as a real pastor for other churches (a real pastor position would have given me a real wage).  This followed the theme of my youth pastoring days: (church) “You’re great with young people, but adults… don’t really like you.”  Both churches I worked for had several people hate my speaking style so much the pastors banned me from preaching.  This was devastating when public speaking was something I had always enjoyed and thought was a strength.  Why would God allow that?  Add to this the fact that at this same time when I was desperate for work I was interviewed for a position at Dofasco.  They were interviewing six people for four positions and one person didn’t show.  Guess who was the one person not hired.  They said I was too employable to hire.  At the same time, a therapy office I applied to said I was by far the best interviewed candidate, but someone else had more years of experience, so they went with him.  Around the same time another office that interviewed me said I was overqualified as I had more education and experience than the two women doing the interview.  Why wasn’t I ever good enough?  How could God not care enough to help me get a job?  How could I spend thirteen years heavily involved in ministry for three churches (I volunteered for five years before becoming a youth pastor), which led me to being more backstabbed, judged, ripped apart, and betrayed than anyone I knew?  Outside of the church wasn’t much better.  I wasn’t Christiany enough for Christians and I was too Christiany for the world.  I didn’t fit in anywhere, which didn’t make any sense because I thought I had followed God’s guidance.  No matter what I did I kept being attacked when all I wanted was to be good enough for people to love and accept me.

I hope you caught the saddest part of this letter in that statement: “good enough for people to love.”  A major part of why I was such a workaholic people pleaser was to impress people.  Not only that, but I wanted to impress God.  Part of me figured if I could impress others, they would like me, which meant there was a chance I could like myself… another very sad statement.  Fueled by my competitive nature, I wanted to stand out as one of the greats… and God protected me from that.  All of the betrayal, attacks, and resentment I’ve experienced from other people, all the hurt I caused others, God used that to protect me from becoming just another fallen Christian leader like Jimmy Swaggart, Jim Baker, and Ted Haggard.  God had other plans than for me to be “great” in human eyes.  He wanted me to discover what it means to love and accept myself the way He loved and accepted me.  I didn’t need to do “great” things for thousands of people.  I didn’t need to earn the world’s love and admiration.  Instead, God had a better plan for me than to be rich and famous, which is usually associated to a lifestyle of loneliness and insecurity.  He wanted me to develop connection with people on a personal level and help them learn to love and accept themselves as He had taught me.

One of the best parts of having you come into my life is I’ve had more moments of peace this past year than I’ve ever experienced before.  I can still question God, but those thoughts have mostly been replaced by moments of peace, which are moments where it feels like everything is what it’s supposed to be in my life.  It’s like you were God’s way of saying, “I said I was guiding you.”  All the twists and jerks in my journey and even in my family’s journey like your Aunt and Uncle taking five years to have your cousin all came together beautifully when you came into our lives.  Your birth was the start of things making sense.  Having you in my life has helped me better accept the journey I’ve had because you make it worth it.

I know when I was in elementary school I was disappointed that my dad was older than all of my friend’s dads (he had even been a couple of the other dad’s elementary teacher) and I vowed I wouldn’t do that… and I ended up being even older than he was when he had me.  Fortunately, I praise God for this because if I had you ten years ago I would’ve been a terrible father.  I would’ve been defensive and guarded trying to prove myself through you in some way.  Back then I still had so much I had to learn about being a good person in order to be at my best for you.  You may have an older dad, but I’m the best version of myself that I can be.  I may never see my grandkids, but all I needed was to see you… and hopefully a sibling or two.

When you read this you’ll be at an age when you’ll be trying to figure out your own path and the best advice I can give you is do your part and God will do His.  It took me until I was thirty eight to better understand how God had been working with me the whole time.  Every rejection, every betrayal, every insult, every time I got hurt and was filled with guilt for the pain I knew it caused my family seeing me suffer, all of that emotional trauma God has used to make me the best version of me that I can be.  Every time I questioned God and wondered if He cared, He was in heaven whispering, “You’ll understand one day.  Keep doing your part, and I’ll do mine.”

Our lives don’t always make sense, but what does: Love God, love others, and love yourself.  If you can learn to be patient, kind, and self controlled, it doesn’t matter what job you have or how much money you make, you’ll be doing what you were called to do.  Do your part and God will do His. 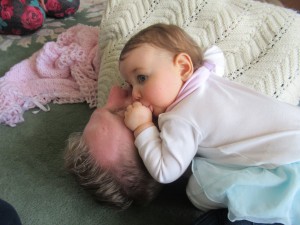