Here’s the question I keep being faced with the last couple weeks: Are they being the victim or playing the victim?  In my book Emotional Sex: Making good relationships great, I point out that we want to be the victor and not the victim, we want to do what we can to help ourselves and not just act like we’re helpless.  Lately, however, the theme has been less victor versus victim and more what kind of victim is this person?  I keep coming across people who are or struggling with others who are “victims.”  Considering the four basic anger styles, this is the breakdown:

Guess which category is the one I recommend?

I like to refer to victimhood as “The Cinderella Syndrome” as we want to feel like the beautiful and wonderful person who is being abused by a cruel and evil stepmother.  In her situation, Cinderella is the victim.  She’s being mistreated and abused by her stepfamily, but she doesn’t wallow in her pain like a passive person will.  A true passive person would be more like, “I don’t deserve to go to the ball, and I’m not strong enough to go there with all those people.  I’ll just make a fool of myself.”  She is a victim because she is temporarily stuck under the care of a selfish and terrible person, but she’s open to do what she can to not be a victim anymore, which is more assertive.  People being the victim, on the other hand, carry on being the victim when they need to stand up for themselves.  Arguably, if she didn’t marry the Prince, when she was old enough she would leave her home to forge a new life away from her abusive family like an assertive person would.

Cinderella also doesn’t play a victim as she seeks happiness and making a better life for herself.  Someone playing the victim would be like, “I’ve had it so rough; how can I go to the ball with all this free stuff that disappears by midnight? If you really loved me I would have it forever.”  Ironically, the evil stepmother plays the victim as she wallows in her plight of having lost her husband and uses this as an excuse to be cruel to Cinderella and take advantage of her.  In our culture, I’d say it’s the teenagers who are more likely to play this card as they take advantage of their parents and complain how hard it is not having the latest phone or being expected to do any chores.

In my personal life, both people being the victim and playing the victim are frustrating for me; why? Because I struggle not being them myself.  When I was young I was very passive aggressive.  I remember being angry at my parents and thinking, “If I ran away that would make them love me better,” or I’d sit at the breakfast table waiting for my cereal, but Mom would be busy, so I’d sulk, “I guess Mom doesn’t love me enough to care about getting my cereal.”  Yeah, I totally sounded like a millennial there… but I was four, so it’s more acceptable.  Regardless, I’ve grown up knowing how to play the victim.  In my twenties, after learning what passive aggressive was and being appalled by it, I became passive and more likely to just accept mistreatment and suffer in order to avoid conflict.  Fortunately, I know what assertive looks like now and do my best to go that route, but sometimes it’s hard and I really just want to have a pity party, which is the worst of all parties.

So how do you handle these people?  For people being the victim, I like to use leading questions to help them see they’re not helpless: “Didn’t you get through a similar situation like when…” or “I remember when you faced and even bigger challenge, and you…”  Another option is to let the person vent and pout because sometimes we just need to be sad for a bit, but at some point you tell them you’re going to give them a set amount of time before you give them a metaphoric kick in the pants.  A third option is to let the person crash and burn because sometimes people need to fall on their face in order to snap out of their perceived weakness and have survival mode kick in like with lazy teens: (teen) “Wait, you’re going to make me get a job or get out of the house?  I can’t just mooch off you and play video games the rest of my life? That’s so unfair! I’m only twenty-five!”

Dealing with people who play the victim is difficult in a different way because they’re more vindictive and spiteful.  Ideally, you won’t get involved with these people because they’re dangerous.  If you’re forced to deal with them, however, I find the best thing is a good question that gives two options where one option is positive like, “For my understanding, are you saying you’re completely helpless and weak or are you just venting your frustrations?” “To clarify, are you weak and pathetic unable to do anything for yourself or do you just need to complain for a bit?” or “So are you trying to make me feel bad so I’ll do the work for you, or are you just needing to know I love you no matter what?”  The hope is if you call people out on their junk, they’ll admit it, but there isn’t a guarantee.  Either way, dealing with passive aggressive people are the worst.

The best advice for dealing with victim mentalities is from this article by a principal giving advice to teens: 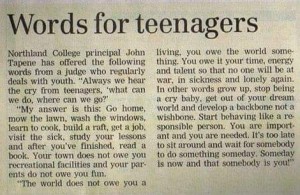 This week may you accept that you’re not helpless or weak.